Today, we'll be attending our final wedding for the year before we move to Australia. It's hard to believe the summer's over. I think this year, we've attended about 5 weddings, 2 of which were out on the west coast, and this is after we had to decline a couple of invites. It's been a crazy busy summer to say the least. 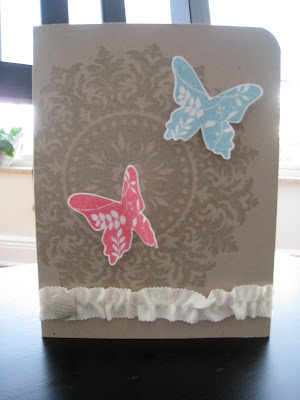 I didn't want to rush another card in the morning so I stayed up late last night putting this one together. When I bought this ribbon, I had the idea that it would like nice on a wedding card. It's so feminine and ruffly! So I just used it to add a little something to the bottom of the card.