November 18, 2010
The other night, Andrew asked me to make three Thank You cards for his clients as he was finishing his last sessions with them. I ended up making four. I know, what can I say, I'm just that kind of wife.
Anyway, I quickly put the cards together and was intending to finish it off with some white dashed lines around the edge, above the strips of paper but decided against it in the end. This saved me some time and effort, but mostly it was because Andrew had specifically requested that I make some cards that were a little more masculine as they were for his male clients.
These aren't exactly the most masculine cards, but at least they don't have dainty dashed lines all around them. 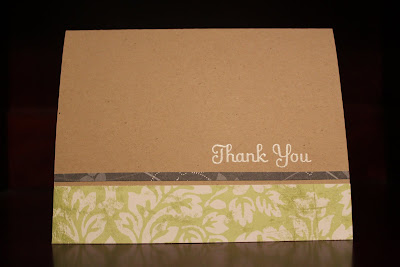